An ongoing question on many Arduino forums is how to modify software to suit the different types of matrix modules available. Usually the poster has tried some LED matrix software and the display is reversed or upside down, or animations are disjointed across the module boundaries.

There are clear reasons this happens, and the Parola library has software configuration parameters that allow you to adapt how the software operates to suit your hardware module.

Why is there a problem?

The first thing to understand is why there is a problem at all.

The MAX7219 control IC was originally designed to control up to 8 digits of 7 segment display. Each digit has 7 LED segments (named a to g) and a decimal point (dp) connected through a common cathode. The MAX7221 does the same thing but with less EMI emissions. The IC multiplexes the display of the segments sequentially across all the digits to be displayed.

However, unlike the mapping to digits/segments, there is no standard mapping of the 64 LEDs to matrix rows and columns. So there are a number of hardware configurations that can (and do!) result, depending on how the hardware designer has wired up the MAX7219 to the LED module:

A Brief Word on Coordinate Systems

In Parola, display coordinates always have their origin in the top right corner of a display and by convention

The MD_MAX72xx library needs to be informed of the the following parameters to direct the hardware coordinate mapping:

In practice, there seems to be four common types of matrix modules on the market, and so it is convenient to define ‘canned’ combinations for those matrix types: 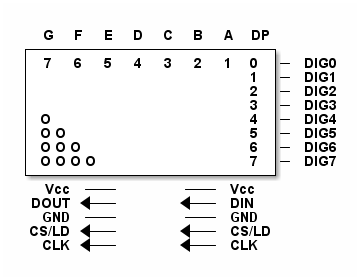 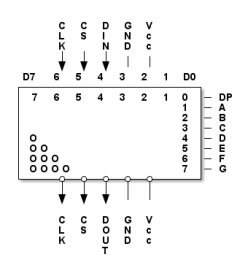 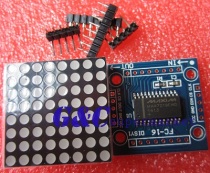 In MD_MAX72xx prior to version 3.0.0, the type of module being used for the library is defined by editing the appropriate #define in the MD_MAX72xx header file. For most users, this was be the only action necessary if they always used the same type of display module.

From version 3.0.0 onwards, the module type is specified in the application as one of the parameters to the class constructor. This eliminates the need to edit the library header file for the different module types.

The library example code includes a utility called MD_MAX72xx_HW_Mapper. This test software maps display hardware rows and columns. It uses a generic SPI interface and only one MAX72xx/8×8 LED module is needed for testing.

It is independent of the libraries as the code is used to directly map the display orientation by setting pixels on the display and printing to the serial monitor which MAX72xx hardware component (segment and digit) is being exercised.

By observing the LED display and the serial monitor you can build a map like the one below. It is worth noting the direction in which the rows and columns are scanned by the utility, as this is the easiest way to work out the row/column reversal values.

The result of these observations is a grid definition that looks somewhat like:

From this example mapping it is clear

Note that in some situations using the module ‘upside down’ will result in a better configuration than would otherwise be the case. An example of this is the generic module mapping. Also remember that the modules are daisy chained from right to left.

Having determined the values for the defines, the mapping can be matched to an existing hardware type or a new type defined.

28 thoughts on “Parola A to Z – Adapting for Different Hardware”