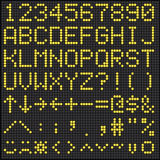 As the main function of the Parola library is to enable text animations, it is important to understand how these are set up and managed to completion from user code.

From a user perspective, Parola animation consist of 3 parts – setting up, running and resetting the animation. The process is not complex and is illustrated in the numerous library examples. This article breaks these down and explains how the Parola class methods apply in each phase.

END_OF_DOCUMENT_TOKEN_TO_BE_REPLACED 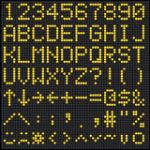 The key function of the Parola library is to display text using different animations. These animations are built around a core supporting framework and largely follow the same patterns. This article explores how Parola animations code is constructed so that advanced users of the library have enough information to be able to write (and contribute!) their own new animations.

END_OF_DOCUMENT_TOKEN_TO_BE_REPLACED

Managing fonts in the is a key factor in the Parola/MD_MAX72xx libraries to being able to support multiple languages and diverse alphabets.

In the first part we looked at how fonts are defined and the tools used to create the bitmaps for each character. In this part we will look at the Parola and MD_MAX72xx library methods that access and manage font data in the library code.

END_OF_DOCUMENT_TOKEN_TO_BE_REPLACED

The Parola library allows you to display text on MAX72xx controlled LED matrices using a wide range of text effects. One of the base components for this flexibility are the replaceable fonts and the utilities that allow new fonts to be designed and implemented in the library code.

END_OF_DOCUMENT_TOKEN_TO_BE_REPLACED

One of the downsides of home-made CNC printed circuit boards is that a lot of the copper cladding remains and can lead to short circuits when solder strays onto the common waste area outside the formed tracks. Also, after a while it tarnishes and does not look great.

One solution to both these problems is to apply a solder mask over everything that is not meant to have solder on it, similar to professionally made boards.

END_OF_DOCUMENT_TOKEN_TO_BE_REPLACED

Radio buttons were named after the physical buttons used on older car radios to select preset stations – when one of the buttons was pressed the other buttons would pop out, leaving the pressed button pushed-in as a visual reminder of the current choice.

These days radio  buttons are mainly found in graphic user interfaces. As an experiment, I wanted to create a physical user interface modeled on the concept, using LEDs and tact switches.

END_OF_DOCUMENT_TOKEN_TO_BE_REPLACED

This is a yet another contribution to the already extensive literature that surrounds RGB LEDs and changing colors, but in all my research I have not seen the method I have implemented, so here it is in case someone else can use it or similar algorithm.