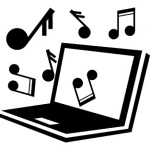 Keeping time in music is very important. So it stands to reason that MIDI files include a number of parameters related to keeping time, and the MIDI standard also includes time synchronization messages to ensure that all the instruments keep to the same musical beat.

Part 1 covered the content of Standard MIDI Files. In this part we’ll look at the how to  keep the music synchronised to the beat, one of the more complex parts of playing a SMF.

What is a Beat?

The fundamental time unit of music is the beat. Beats can be slower or faster depending on the kind of music, and the tempo (speed of the beats) can change even in a single piece. Tempo in standard music notation are typically given in beats per minute (BPM).

In music a bar is a segment of time defined by a given number of beats of a given duration. The values which define a bar, are called the Time Signature.

A Time Signature is two numbers, one on top of the other. The numerator describes the number of beats in a Bar, while the denominator describes of what note value a beat is (ie, how many quarter notes there are in a beat). So

The default MIDI tempo is 120 BPM, and the default Time Signature is 4/4.

However the Set Tempo meta event can change these defaults. As MIDI only deals in quarter notes, the Set Tempo meta event only deals in quarter notes but also gives the time signature. If the time signature is 4/8, a quarter-note is not a beat since its described as an eighth-note, so using it to calculate beats per minute on its own is incorrect.

Musical timing is defined in fractions of a musical beat, so it makes sense to create a timebase that measures time as fractions of a beat. A quarter note is always one fourth of a whole note – regardless of the tempo. Similarly, a sixteenth note is always the same fraction of a beat. The rate at which the notes occur can change as the tempo changes, but the relative durations are always the same. So the ideal timebase divides a musical beat into many small bits that occur at a rate determined by the current tempo. Each of these tiny fractions of a beat is called a tick, and the number of ticks per beat is independent of the tempo.

Events in a SMF are defined in terms of Delta Time. Delta Time determines when an event should be played relative to the track’s last event, in ticks. A delta time of zero ticks means that it should play simultaneously with the last event. A track’s first event delta time defines the amount of time (number of ticks) to wait before playing this first event. Events unaffected by time are still preceded by a delta time field, but should always use a value of zero and come first in the stream of track events.

Delta times are stored as ticks, so what we need to know now is how many ticks make up a quarter-note. This is given in the header of the SMF as Ticks Per Quarter Note.

The number of microseconds per quarter note is given in the Set tempo meta event and is by default 500,000 if not specified. So

Delta times are cumulative, and the next event’s delta time needs to be added onto this one after it has been calculated. If the MIDI time division is 60 ticks per beat and if the microseconds per beat is 500,000, then 1 tick = 500,000 / 60 = 8333.33 microseconds. The fractional number of microseconds must be properly accounted for or the MIDI playback will drift away from the correctly synchronized time.

Or, in terms of the calculated units of measure

So the question remains as to where does all this data come from?

In Part 3 we’ll explore hardware required to play MIDI notes and the functionality of the MD_MIDIFile library.